Hard drives over 2TB now recognized by Wii U 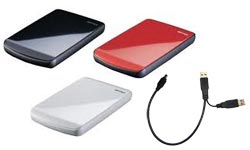 But not fully utilized

A new Wii U system update (yes another one -_-) was released for download by Nintendo yesterday. It's another sizable download which can take over an hour to get and install.

What this update accomplishes isn't exactly clear, but one positive thing is that people (madmen) with hard disks larger than 2TB can now use them with Wii U, whereas they couldn't before.

It's worth mentioning that the Wii U will still only be able to use 2TB of the drive, regardless of how big it is.

If you've been thinking about getting a USB hard drive for Wii U gaming, Nintendo recommends using a drive with its own power source (mains adapter). That might be best practice, but another option is to use a USB Y-Cable, which will occupy both USB sockets in the back of the Wii U console.

Good news for some, but unless you're planning on downloading a ton of retail games even 1TB is overkill.