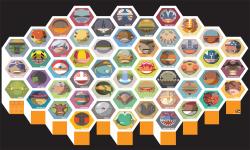 Game close to being funded

Prismatic Game's Hex Heroes now has only a little more than 24 hours before its funding period ends. The title currently is very close to being funded, but any funding would help ensure the project getting off the ground.

Described as a new type of Real Time Strategy game for all ages, Hex Heroes plans on allowing single and cooperative strategy gameplay. The Wii U gamepad would be used in a unique way by one player, with up to four others able to control onscreen characters via Wii remotes. The title would feature renowned game composer Grant Kirkhope, known for his work on such Rareware games as Banjo-Kazooie, Donkey Kong 64 and others.

Hex Heroes has seen a recent upsurge in funding, and Prismatic hopes to make a few of the game's stretch goals, including online play. Time will tell if this will happen, but simply having a unique and fun Wii U exclusive would be reason enough to celebrate. Please help support the game if you can at its Kickstarter page.