Today we take a look at the moves of Captain Falcon, in the Super Smash Bros. Brawl update. This heroic looking blue guy comes from the F-Zero racing series. 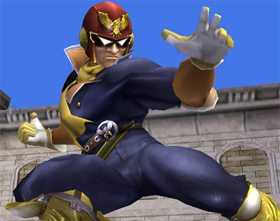 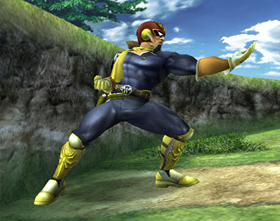 Yoga chills me out after a hard day's racing. 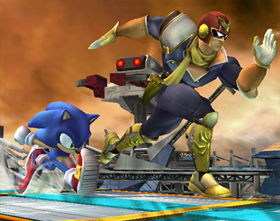 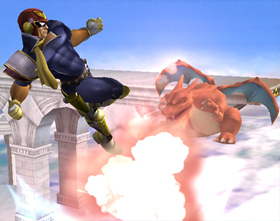 YEEESH! Who let this thing out?

How to unlock Captain Falcon 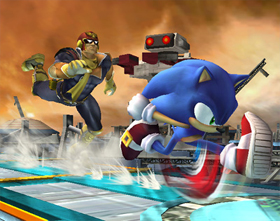 Puff, I'm getting too old for this.

Standard special move: Falcon Punch
CF's most famous move, the Falcon Punch is back! It's a heavy hitter. 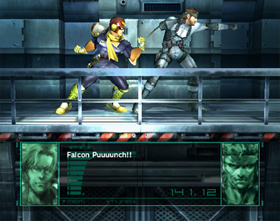 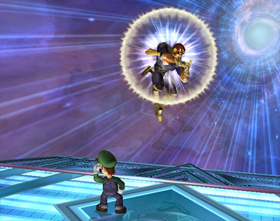 Tee-hee, he doesn't suspect a thing. 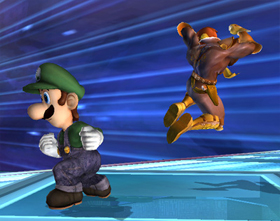 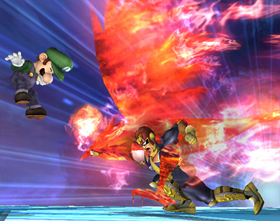 Excuse me, I think you're on fire.

Down special move: Falcon Kick
The direction of this kick changes, depending on whether you're in the air or on solid ground. 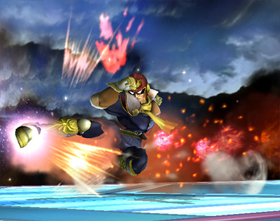 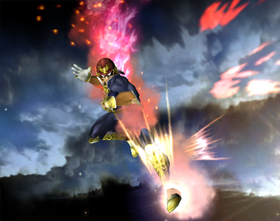 Final Smash: Blue Falcon
The Blue Falcon is CF's racing machine, for this move opponents get pulled onto a high speed racing track. 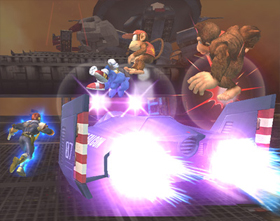 Hey I was in the middle of lunch. 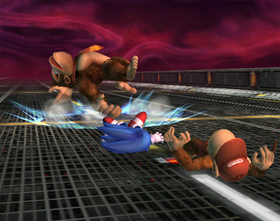 Hedgehogs and monkeys, the usual roadkill. 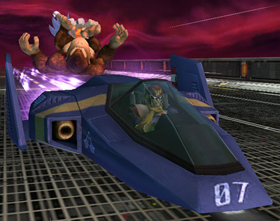 Beep beep, late for a meeting.

Hey that's pretty cool capt falcon being a secret character and all and his moves are the same pretty much but they look good.

This week was falcon week, he looks cool and real funny pics. Next is jigglypuff and maybe mewtwo and roy.

Yes! One of my favorites.

I have nothing agianst Captian Falcon but I'm shocked he made it in.

Alright finally! Now I've got the info I need to get him as a character.

Poor Captain Falcon, got his speed title taken away by Sonic (How does a F-Zero Pilot deal with the fact he wes outrun by a blue, two-footed, hedgehog?). But then again with a Final Smash like that and two awesome moves he scream out, it makes up for the loss. Man, I hope they release more of Snake's conversations soon, I want to hear several more of the ones I don't know (someone translated a few, but not all). I would like to hear the Pokemon Trainer, Kirby and Snake conversations.

Funny quotes, I thought they would put this guy in, but what about Mega Man? That would have been an ample decision, and would've kicked the game into high gear, just needs different moves. He would slightly be a clone of samus, but that's only with the power shot, I guess he could have weapon change, super dash, rush suit, and other stuff. His final smash would have to be Astro Crush, from Mega Man 8. That would be awesome.

I knew he'd be in brawl! My brother is a big fan of him.

Glad he's back. I like his Falcon Punch revert the best.

Hey, where's the knee? That was his best move.

Nice captions as usual. Captain Falcon looks to be greater than before.

Nice moves CF, we all knew you'd come back in a big way.

Did anyone notice the giant R.O.B in pics 3 and 5?

Sorry, but no Mewtwo or Roy. Heh, took them long enough to announce my fighter of choice.

They totally took that whole Sonic thing out of context, because any smash fan can tell, that was C Falcon's down smash as we all know he runs much different, visible in pic three (down smash in pic five). That really made me mad.

How come rob is there if Nintendo didn't confirm her?

Wow that's pretty sad. You're not even talking about his best attack. The Knee! A single blow on an ennemy over 50-60% is an instant KO and the bad thing is they nerfed it really bad. Less damages and less knockback. I guess I'll just go back practice with a swordsman. Cheap killers but at least they didn't nerf em at all.

Dude! I played with CF in the original super smash and in melee! I was really disappointed when I heard rumors that he wouldn't appear in the game, but I'm happy as can be now. Just got Brawl this morning and I'll be unlocking him in the next 12 minutes. By the way you can't say the Falcon punch looks sweet.

Okay. I'm pretty sure that place in pics 3 and 5 is Port City. I've played there a lot. But, I still don't know why R.O.B. would be there.

Nice Captain Falcon quotes. I just got a Wii and brawl, like uh about a week ago or a little more XD and the giant R.O.B is well kind of weird. I almost got all the characters, just need wolf, toon link and a little more I guess. I like it. By Katrina ^.^

Captain Falcon is the Best (fav character by the way). He ownes all.

Nice Captain Falcon quotes. My brother and I just got brawl.