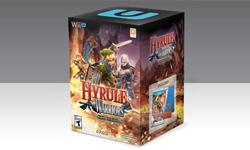 Will only be purchasable at Nintendo World Store

Nintendo has confirmed that the "limited edition" version of Hyrule Warriors will be released in the US. However, it will only be purchasable at the Nintendo World Store in New York.

Store reps tweeted that the "limited edition" would be available on the game's launch date, September 26th. Due to such a low quantity and a high demand, the store will not be accepting pre-orders. It will strictly be on a first come, first serve basis.

It is a rather odd move by Nintendo, considering it was available for sale through wider channels in Europe and Japan.

So, if you can find it, will you be shelling out money for this "limited edition" come September 26th?

For a second there I thought that was a console bundle.

I'm somewhat annoyed that it's only available in the Nintendo World Store. I wish Nintendo had more stores, similar to a mobile provider. Then they could see exclusive things and perform repairs more conveniently.