Ice Climbers kick off the start of the week with their final smash, in the Super Smash Bros Brawl update.

The move is called Iceberg, and it does exactly what it says on the tin. Once the Ice Climbers get the smash ball, bam, a huge iceberg appears in the middle of the stage.

This has the effect of damaging opponents, freezing them in some cases, also making platforms smaller and more slippery. 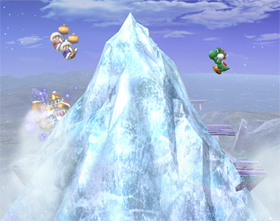 I am the mountain, I take no prisoners. 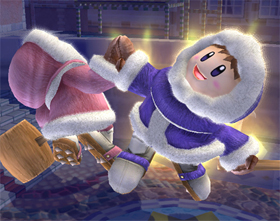 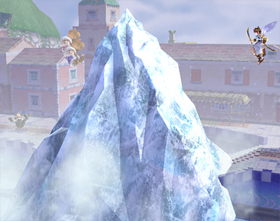 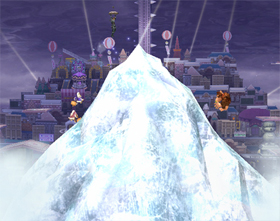 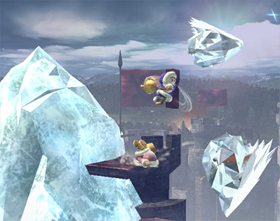 I'm not having a good time in here.

Best Goomba EVER! Mmm couldn't have expected an ice attack for their final smash. But I'm glad it's more than just freezing everyone.

Sweet! Pretty creative but I say they should summon a giant eggplant that shoots eggs.

I was actually wondering what their final smash would be. This isn't that bad.

Cool smash, an iceberg was what I was thinking about. You guys are so creative, you always know what's best.

Wow it's an amazing Final Smash and these two totally deserve it like no tomorrow. They're just the amazing duo of awesomeness that's too cool for words. But my only question would be if the Smash would still work if one of them is gone?

This is a sweet update, I love it! I love whatever that is they are riding on and the flag.

That Goomba! This Final Smash is going to hurt.

I kind of like this. I was worried at first, but I think it's suitable and effective. Nice work.

Nice final smash. I can see that being an KO for the Ice Climbers.

Pretty awesome final smash for the Ice Climbers, and it makes me like them even more, being able to make a huge iceberg to hurt everyone else. The captions are super worthy. Especially BFF. That was the best, don't know why, just did.

Pretty cool final smash. I just want to see it in person.

I thought it was going to be a blizzard, but I like this one.

I can't imagine that on Battlefield.

Definitely one of the better final smashes. Never played with these guys before. Might try em out because of this.

There you have it folks: the solution to global warming.

I was expecting a blizzard, but this is cool too (see the pun). I think the blizzard will probably be for Dedede or maybe he would just avoid his penguin background entirely. Cool and effective final.

Finally, those boots are useful.

Hmmm looks like I was wrong about the ice climbers final smash but I'm glad they finally have a nice update.

Rising phoenix I think dedede's a fat blue bird or something not a penguin.

King Dedede is obviously a penguin (period) and a penguin also falls into the "bird" category. But this ain't the topic here.