Ike's up special move in Super Smash Bros Brawl is called the Aether. It's a 3 phase attack, first he throws his sword up into the air, next he jumps up and takes hold of it, lastly he plunges down with a slicing motion (that's the part where you move out of his way).

It's worth noting that as soon as he starts this attack, he won't move if you attack him. He'll still take damage but he won't flinch no matter what you do to him

Another special move he has is called Eruption. This can be charged up and causes an explosion of flames. 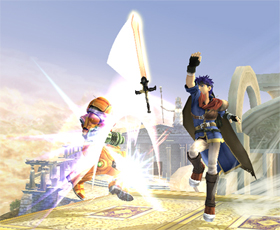 Shoot him in the ribcage Samus! 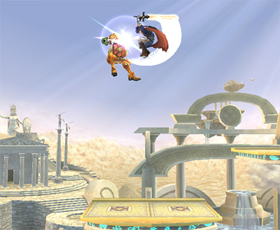 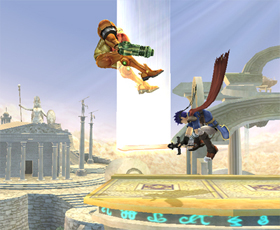 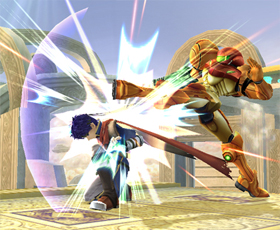 That's when it's time to kick some back. 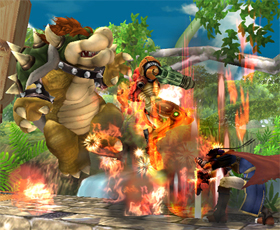 So this is how forest fires start.

I wonder if eruption will hurt ike.

The first one looks kind of like Kirby's Up-B attack. I hope he's replacing marth and roy: we don't need a third almost-identical clone. Better yet, I hope marth and roy get completely overhauled with completely different attacks.

You can't really get out of his way when he is in the air, because you are partially stunned, you also go up with him. It's exactly like Roy's Left or Right+ (B) and you can't really escape it.

It looks a bit like kirby's up/B move in melee.

All three of them are in Fire Emblem, so yeah, I would imagine he is like Roy and Marth.

I hope they get rid of roy and marth, they only need one fire emblem character.

All the swordfighters confirmed in this game rule.

I like this guy already! He looks to be just as powerful, if not more so, than Roy. Now, let's hope he moves like Marth.

If this is Roy's replacement, I can live.

Maybe they'll have marth or roy this week. I really hope they have them, I love them so much. One question for the first three screens, are they all different moves or part of one move?

I wonder if eruption is a lot like Marth and Roy's B attack. And I think you have the wrong game, Goomba. That's Battlefield you're thinking of.

Ike is awesome in this.

Yeah have you guys seen him from Goddess of Dawn!

Since when was Bowser that big?