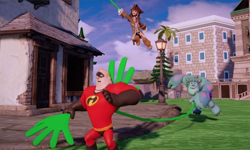 The Epic Mickey series may not be doing so well, but Disney fans have a whole lot more to look forward to this Summer when Disney Infinity is released on Wii U, 3DS and Wii.

Something similar to Skylanders, Disney Infinity will combine video gaming with the collecting of plastic figures. It's unlikely to be cheap, but here's a trailer to explain more:

Disney Infinity will initially introduce a line of 40 collectible interactive figures - characters, "Play Set" pieces and power discs - that allow players to expand and customize their play experiences. Over time, Disney Infinity will release additional characters and "Play Sets" and this platform will constantly evolve.

With an extensive back-catalog of well loved characters, Disney Infinity clearly has some potential. Do you think it will take off?

I can see younger gamers eating it up.