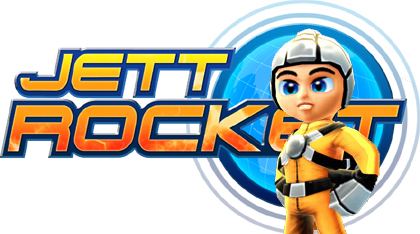 Yesterday saw the announcement of Jett Rocket, a vibrant and promising game on WiiWare. Manfred Linzner of Shin'en Multimedia took time out to answer a few questions for me:

WW: Hi Manfred, can you tell us a bit about Jett Rocket?

JR is in development since over a year. We really reached very far for that game. Much further than we did with Nanostray 2. Our goal was to provide a 'better than retail' experience on WiiWare.

WW: This appears to be a very ambitious project for WiiWare, have there been any headaches during development?

When creating a 3D jump'n'run you have to consider that Mario 64 and Galaxy have set the standards. And you need to deliver those standards or perhaps go beyond to make the players happy. The tech for those Nintendo games took literally many years to get to perfection. Our goal was to meet those standards or go beyond wherever possible for our type of gameplay.

For instance the camera system is very important. Mario Galaxy used mostly a fixed camera system. That worked brilliantly. The only drawback was that it took out most of the exploration gameplay that was a very fun part in Mario 64. We tried to combine the best of both worlds and use a free adjustable camera system most of the time and for special regions or some boss fights a fixed one to deliver a deeper experience.

A very big task was also to get the collision system right. Everything had to be super smooth. You don't want to have invisible walls like many big budget nexgen games still have. You want to explore freely. If you see something you want to explore then you can really go there.

Probably the biggest headache could have been the limited size of 40MB for a WiiWare. Thanks to our DS development past we had already perfect tools that allowed us to create large worlds in tiny space. A lot of custom tech was developed for that reason in the past. Now it really paid off. With the usual techniques used for level building the game would be more like 400Mb.

WW: Yoroppa is a planet with a lot of variety, how many different "zones" does it have?

There are three climatic zones. Inside those zones there is a great variety from level to level. A lot of work has gone into making every level as different as possible to those on the same zone. On top of that each zones has its own range of vehicles.

WW: It seems like the kind of game that wouldn't necessarily need motion controls, are they used?

We created a control scheme that is very easy and accurate. It also features some motion controls, but instead of using them them in pointless minigames or in non-stop waggling they are very well integrated into the game mechanics and add to the experience.

WW: Jett has to take on bosses at the end of each level, what moves does he have available in terms of combat?

Jett is very agile. He has the jump'n'run moves everyone loves plus some special attacks which we will reveal later. He can also pick up stuff, throw stuff and operate a lot of vehicles and machines.

WW: The release date is yet to be announced, do you have a timeframe in mind?

As always, the final release date is up to Nintendo, though I'm pretty sure you won't have to wait for very long.

WW: Finally, can we have a review copy when it's out? :D

Many thanks to Manfred for the interview. We'll have more info on Jett Rocket as and when.