Take off on an island adventure packed with excitement! Designed for kids aged 5-9, JumpStart Escape from Adventure Island is the second title in the JumpStart series of adventure-based learning games for the Wii. This action-packed game invites players to use their explorer skills and brain power to find a way to escape a mysterious island after a crash landing strands them there! As players race to collect the pieces needed to repair their blimp, they'll need to ward off the pesky furballs known as Punk Punks and navigate 3D worlds both above and below the water. Along the way, players can practice over 150 math, reading and critical thinking skill - the fun way! 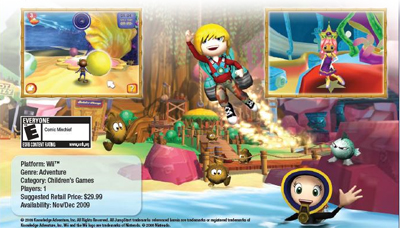