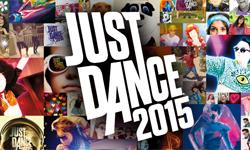 Some of the 40+ songs revealed

Publishers Ubisoft have been busy announcing a number of things at the E3 expo, but there's not too much coming the way of Wii U. One game that is making the transition however is Just Dance 2015.

This latest in the JD series will contain over 40 songs - here are the ones that have been announced so far: