Developers Kando Games are bringing two games onto the Wii. The first title is Rebel Raiders: Operation Nighthawk. When originally released for the PoS2 it was tenaciously average, so don't expect too much from this one. It will however sport updated Wii graphics and use of the Wiimote.

The second is an undisclosed action adventure game known simply as Deadline. Watch this space. We have got some cover artwork though. 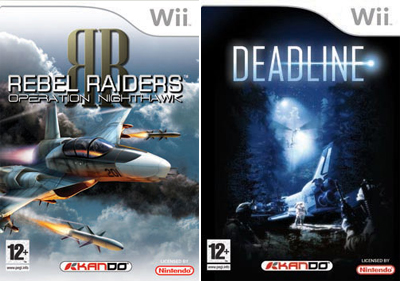 Not quite sure what to expect from them, so I'll just have to wait and see.

Cool looking boxes unlike the other crap that has been popping up as of late. I never see these games in stores anyway.

I'm definitely curious about this Deadline.

Well, at least it isn't a bunch of mini-games. Let's hope they are worth buying.

Rebel Raiders sounds like a lame title. The box for Deadline looks intriguing though.

Is Kando any good? Or are they just like a no name brand kind of thing?