Yesterday King Dedede from the Kirby franchise was announced as a playable character in Super Smash Bros Brawl. Today we get to hear about some of his moves.

Dedede's Up Special Move is called the Super Dedede Jump. He jumps a great height in the air and slams down hard with his hammer. While in the air he can't move around a lot, and when he lands he's vulnerable to attacks. But on the positive side, you can cancel the move in mid-air if you want to. 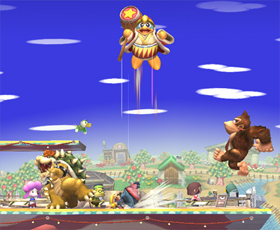 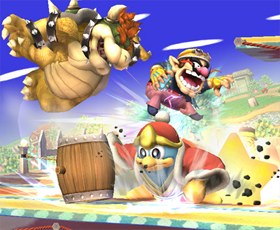 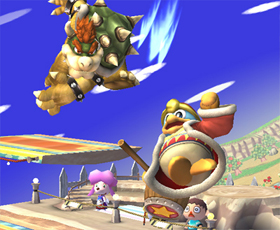 His Side Special Move is called the Waddle Dee Toss. This is where he pulls out Waddle Dee creatures and throws them, and occasionally other types. 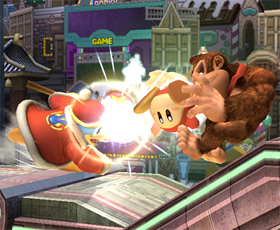 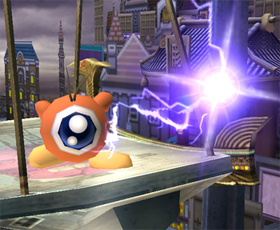 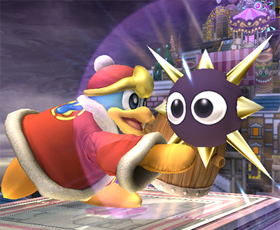 I knew something was sticking in me.

Lastly, Dedede's Down Special Move is the Jet Hammer. His mallet isn't as simple as it first appeared, using the control stick you can charge it up to be a real destructive force. 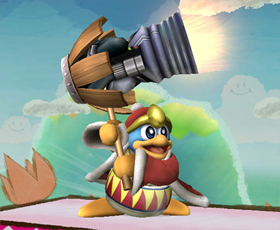 Thanks MTV, for pimpin' my mallet. 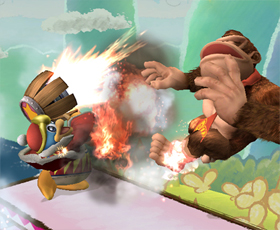 This is the end!

I like that second last one about pimping my mallet.

Not a very good update to end the week, but it was okay. Love the seventh caption.

I bet you that Mallet transformation has something to do with his Final Smash. Maybe like he creates a sonic boom from his mallet swing, I know the perfect name for it: Mallet Boom.

They always reveal the moves the next day. Sweet moves. I hope bowser jr's playable as a secret character.

Oh man, I didn't think I would ever really use King Dedede until this update. His special moves look fun! I just might have to try him out after all.

They didn't say anything about his normal smash button. And I wonder if this jump will be like Kirby.

The Waddle Dee toss is copying off Peach's Turnips from Melee, that makes me mad, but good update.

I don't like the fact that he is vulnerable after the super jump. Maybe it's to balance out the game, but at higher difficulties cpu opponents will always know when it's coming.

The Waddle Dee toss is the best. He sends out his minions and then they walk around for a while creating some stage hazards. I wonder how many of them can be out at a time? I hope he has a blizzard type of an attack because he IS a penguin. I think I'll use this guy once in a while.

I like how he uses some bad guys as his attack. This game keeps getting better and better.

Ya know, king dedede doesn't look all that evil.

Zant would be an awesome character.

YA! Dedede is the best character in the game! Can't wait to play as him.