Ever heard of a guy called Knuckle Joe? I know I hadn't! But he's the latest assisting character revealed today on the official Super Smash Bros Brawl site.

He's taken from the world of Kirby. He seems to have a martial arts vibe about him, and he likes to wear thongs on his head. Also most of his moves seem to be ripped out of Street Fighter. 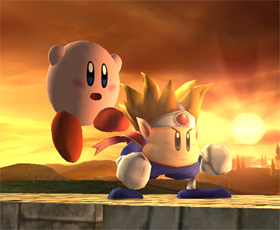 Already seeking the next challenge, ceremony means nothing to him. 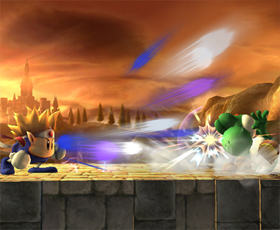 Wake Yoshi up when it's over. 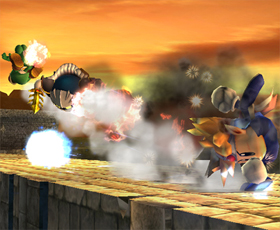 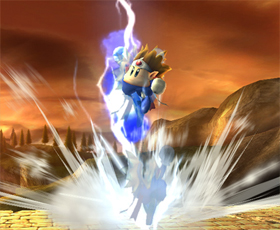 Saw this on the site about an hour ago. Pretty cool update. Lol at the captions. First to post as well.

Yay. Knuckle Joe was my favorite character in Kirby Super Star. I hope someone makes a cheat to find the debug menu so I can play as him.

If they put sonic as an assist I will go crazy. The raving rabid would be a good character or assist though.

The lighting so far is awesome. You can't call yourself a Nintendo fan without knowing Knuckle Joe. Check out Kirby Superstar, cough VC game! Joe would have been an awesome playable character, so Nintendo should have some pretty awesome NEW PLAYABLE characters lined up.

I've never seen him before.

Oh yeah! I remember Knuckle Joe! In "Kirby Super Star" he was one of your partners.

I remember a game named knuckle joe, but isn't the same guy.

That's cool. I hope they have another cool assist character next time, like Boo! Wasn't the first caption up there like a reference to Ryu's Ending from SF2?

Please don't make Sonic an assist character! He probably won't be though, because then Sega would get mad.

Cool. He should be useful.

Good old Knuckle Joe, I remembered him from Kirby Super Star. He'll be a good assist character for sure.

I don't remember him.

I have a better subtitle for the second picture: ORAORAORAORAORA!. OOOOOORA.

I never heard of him either, but he still seems like a great assist trophy to have handy. I hope he gets over his thong-wearing fetish before Brawl comes out.

I don't know who he is either. Still cool though. Now show us an actual playable character, Sakurai. Please?

Never heard of him, but should be fun.

I wasn't expecting knuckle joe to be an assist. Wow he brings back memories.

Put luigi in there, but not with the same moves as mario. Let his smash be electric, like in mario & luigi super star saga.

Was he the one in the Kirby games that you had to break the bricks with or whatever?