Fox's final smash move in Super Smash Bros Brawl has been revealed today. He calls forth the Landmaster, a tank which originally appeared in Star Fox 64.

When it arrives you can make it hover, roll and fire the cannon. 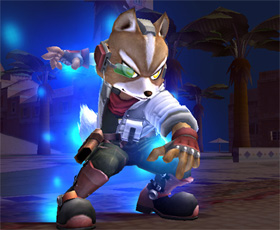 It's about to get freaky up in here. 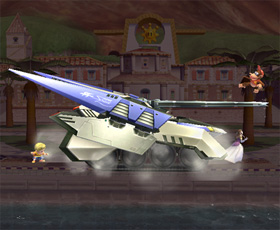 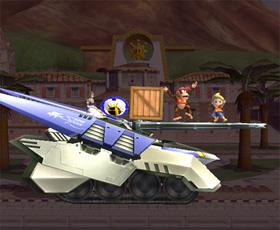 I smuggled this crate through the neutral zone. 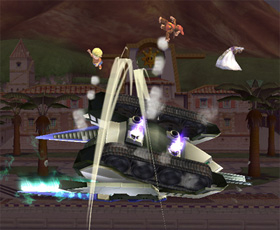 I could use a tune-up. 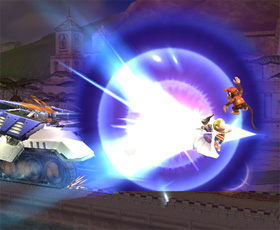 Just when you weren't expecting it. 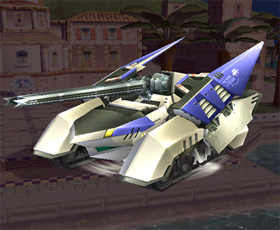 This smash was great but what's with the crate and bumper doing in this post.

Oh the Landmaster tank is the tits! Especially because in the screenshot Lucas is getting obliterated.

So I'm guessing if falco is in the game his could be the arwing. I also read on wiki that falco is better at flying an arwing than fox and he's a bird!

In the fourth pic who is the person in the up right?

Didn't expect that. I thought his crew would attack.

This is so cool.

That thing looks like a really good final smash, everyone will get owned.

Do a barrel roll.

Cool, no one will ever talk about his ears again.

Zelda was the upper right in the fourth pic, by the way does that mean if Falco does return will he final smash with the more agile Arwing? This has been addressed before, and maybe (this is new) he could be riding in his Command model.

I can't imagine how this will works in the Dk stage with all the ladders.

Nice. Fox had a lot of final smash options, I'm glad they didn't do a predictable and repetitive one.

In the upper left in pic four, I think it's Zelda.

Umm, up in the right is Zelda, and by the looks of it she is hurting very bad.

This is a cool final smash but how the heck is that thing going to hit people on small courses.

Now that's a Final Smash! Great creativity and potential to do a whole mess of damage. Well done.

Yup, it's time to do a barrel roll!

In the pictures it shows that people and that crate can stand on the Landmaster. But if you roll over like that. It throws them off. I hope you can squish people.

This is an awesome update. I was wondering what Fox's FS was, this will be the best game ever.

Impressive, Star Fox. Now watch out for enemies in the asteroid field.

I thought his final smash was going to be Arwing, shoo-in. I wonder if this tank design is from the upcoming starfox game that we all know will be revealed for the Wii soon.

No googolmario the tank is from star fox 64.

Do a barrel roll.

This is going to HURT! Might be hard to turn around though.