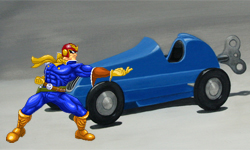 The latest edition of the UK's Official Nintendo Magazine gives us the lowdown on the 3 remaining attractions in Nintendo Land that we didn't know much about until now.

To save you from squinting, here's a transcript of the text:

Captain Falcon piloting a wind-up vehicle? That's a new one.