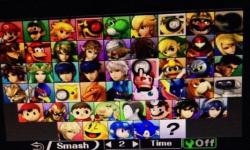 No confirmation from Nintendo

Footage and pictures have emerged from an unknown source that revels 12 currently unconfirmed characters for the upcoming Super Smash Bros..

According to the leaked information: 8 of the 12 characters will be returning, while the other 4 will be new to the series.

The videos below will give players an idea of how these characters will play:

I want to stress that these videos are unofficial and have not been confirmed by Nintendo. There is no way to confirm the inclusion of these characters.

We will continue to update this story as it develops.

"This video is no longer available due to a copyright claim by Nintendo of America Inc.." - could well be legit :)

Apparently a fan saved the videos and has re-uploaded them. Here's the link: https://www.youtube.com/watch?v=LeCAfmBiKoU&list=PL1rHx38_PSMaurr5hydpX_lDNWvjrynwh

Updated the article with the reuploaded vids. Not sure how long they will last if big N are keep to stamp them out though.