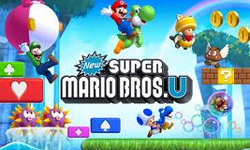 All the Mario world's a stage

A partial list of stages from Nintendo's New Super Mario Bros. U has been released onto the Internet. They seem to follow quite a typical pattern from 2D Mario games - worlds broken down into levels with mini-fortresses at half way and a castle at the end. Those pesky ghost houses are also thrown into the mix.

In case you're interested, here are the stage names released so far:

i just love that the worlds have names now!