Logitech has announced a new peripheral for Wii, this one is a steering wheel. I present to you, the Speed Force Wireless racing wheel. 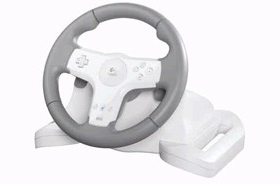 It features force-feedback and has been designed to work with the upcoming Need for Speed Undercover, but will work with future driving games too.

The wheel is wireless, but works through the USB port. This means you have to connect a wireless receiver into the back of your Wii.

At $99.99 it's not what I'd consider cheap, and probably aimed at people who are really into racing games. You can expect to see it hit retail sometime during November, in both the US and Europe.

Need for Speed is not worth it, maybe if it was remake of the original yes, but this no.

Wait. Why not just use the wheel attachment. It seems like it would be a lot more flexible than this.

Good looking but for that price they can keep it.

You all saw this coming.

I would rather pay $20K and buy a car with a real steering wheel because that thing is fugly with a capital fug.

Yea right. For that price I'd rather play with the wheel I got with mario kart.

I already had a Wii steering wheel for the Wii along with Mario Kart Wii so I might skip on this one. I just hope that the wheel I got is also compatible with the upcoming Need for Speed Undercover even if that game isn't very great.

This looks kind of unnecessary. I mean, I like the design, but we already have the Wii wheel for $10! and I would rather have foot pedals than an attachment to a wheel.