Originally seen in the Mother 3 game, Lucas has psychic abilities as well as some physical tricks up his sleeve. 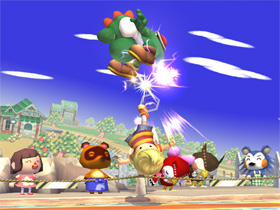 Sometimes you need a kick up the wazoo. 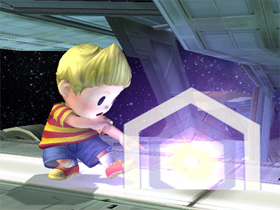 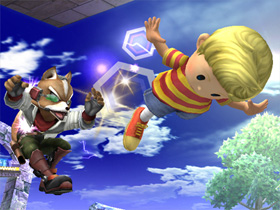 Hey come back here, I want my money. 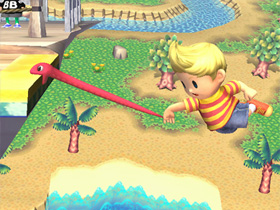 C'mon, we've got an appointment with the vet. 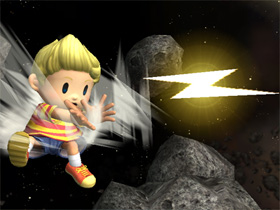 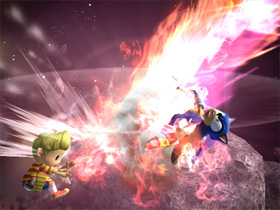 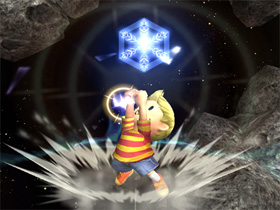 It's getting hot in here. 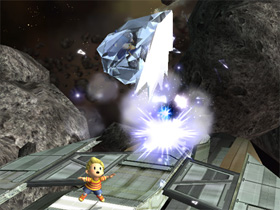 What have I done to deserve this..

Up Special Move: PK Thunder. This is a good move to use for recovery, and also has some value as an attack. 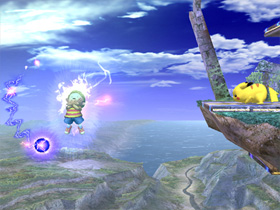 My mind is glowing. 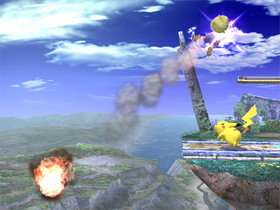 Down Special Move: PSI Magnet. Lucas can use this move to absorb projectiles and other attacks to recover his own damage. 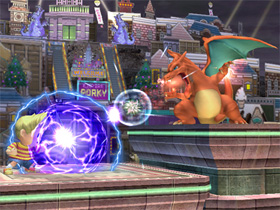 Then what happens to ness?

Pikachu: Copycat newb, thunder is my thing. Anyway it looks like Ness isn't coming back as the way they worded it on the Smash Bros Dojo and the fact Lucas has similar powers (and most of Ness's PK moves) lead to that conclusion. All in all an okay update, but kind of sad too as Ness isn't coming back.

Well this means that ness isn't going to be in. The website clearly gave tis away saying, "There's a character named Ness who has appeared in the Smash Bros Series up until now". So long, Ness. A would-be clone took your place.

Ness should be in brawl with Lucas. They could fight to see who's better.

I didn't like Ness all that much anyway, Lucas is better.

Ness'll probably still be there.

-sigh- Bye, Ness. Have fun not being Earthbound any more.

Yea, I think this update just confirmed that Ness won't be in the game. It's kind of sad because, I didn't really want Sakurai to get rid of any previous characters, I just wanted him to add a whole bunch of new ones. When I saw the Ice Climbers returning I thought maybe he didn't replace any, but now we know. I wanted the roster to be like forty or more characters.

Well, this is all well and good, and although I miss Ness with a vengeance, I am resigned to the fact that Lucas will be pretty cool. Does anyone have any idea what Lucas' Final Smash is? Ness' would have been PSI Rockin'.

He didn't specifically say Ness is out, don't jump to conclusions.

It's basically Ness, except for PK Freeze instead of PK Flash.

"Lucas is better"- oh, you've played this game already? The game that isn't out yet? Stupid.

While I will greatly miss Ness if he doesn't show up in Brawl, Lucas will be a suitable replacement. In some ways, I kind of like him better. He seems like he's got a better personality or something.

Maybe ness will be a secret character.

The line "up until now" can be read in many different ways. I really doubt that Ness won't appear, why replace a character that's been with us since part 1? Anyway, I like Lucas' moves but his blue shield doesn't cover his entire body like it used to on Ness in previous games. I like it better when it covers the entire body. By the way Lucas is still cooler.

Ness still has a chance since Lucas' moves are different.

If ness is gone I am so going to kick someone's ass.

Ness, he was my best character in ALL the games. He's gone now. NOOOOO.

If Ness isn't in, I won't be all that shocked. I didn't hate Ness though, I used him often. I guess this means the cloning is out, hopefully if clones are in they fix them. I'm waiting on Luigi to be in.

Ness is the best, that isn't really fair. Supayoshi88 was thinking what I was thinking, that once ice climbers are in no one will be left out, bet I was wrong. But on the bright side PHire can be right, let's not jump to conclusions.

Dammit, all these years and I've never thought of using pk thunder to recover like that in melee.

This probably means Ness is out (note Ness fans I said probably). "There's a character named Ness who has appeared in the Smash Bros series up until now". That either means Ness is most likely out or something was lost in translation.

Hey peach is #1, you don't know who's better without a fight. So there is no way Lucas is better, get that straight. Ness belongs not Lucas.

I think that they'll cut down on clones and ness is out. But as ness is being replaced by essentially the same character with a different name, I don't see why they wouldn't have kept him. Everyone is used to having ness.

Love that "pika?" comment, keep up the good work.

I really hope he doesn't cut out Ness. He's such a badass, nobody can deny that. I know, his smash up A and smash down A were horrible, but that can all be fixed because Sakurai is God.

The freezing one is almost like the PK flash. Besides that one, all the other special moves are the same as Ness! I really hope they take out ness. Don't worry, Ness fans, it will be the same character only with a different hair, like Roy fans if he is replaced with Ike. Don't you realize they are the same characters. Snake caption was GREAT, so was the fox-PK flash caption.

Ness is my best character, he can't be gone.

The only one different is the freeze thing.

I like Lucas' smash moves but I still think they should put Ness in.

Ness don't go, a journey awaits you for the ultimate battle. Marth and Roy, you too.

Umm I don't think they would remove any characters.

He has some cool moves, but who really cares about Ness? He's been replaced with Lucas who is even more powerful.

Ness won't be gone! It's stupid to take out a veteran character. I can't stand Ness, I truly hate him, but he is a "classic" character, he's an original. And he is NOT the same as Lucas, they just look the same and have the same Up+B and Side+B, but his Down+B, B, and his A's and maneuverability are completely different (it's like wanting Luigi out because he's "similar" to Mario, it's ridiculous).

Like a few other people said, don't be so sure that ness is gone. I think it may be a tease, and the words "up until now" don't make the odds of him returning seem too good, yet they are still ambiguous nonetheless. Besides, lucas is not really a clone, and sakurai probably wouldn't take out any characters that weren't "unnecessary" (i.e. Young link, dr Mario, pichu). Maybe he'll go back to super secret character status like he was in the original super smash bros?

Does anyone know if you can actually control the freeze thing? Or is it like Ness' small range exploding thunder thing?

Ness (sigh), you rocked in a way and yet you were so inferior in others. Ness had been one of my favorite 3 characters in melee. But the harsh truth is that he was a super low tier fighter. This Lucas seems like he's going to kick some serious ass but it's like the following: Solid Snake vs Raiden. Cool isn't always the best, but then again, can it be?

After taking a second look and translating the other forms of the dojo, I found that all the other forms say nothing about "until now". This "until now" junk is probably just something lost in translation, like a certain soft drink that's English slogan was "Come alive with the Pop generation". When it got translated to Japanese it became "Pop brings your ancestors back from the dead".

I'm going to kind of miss playing baseball with ness. I made up this game called nessball, you pick ness and use a mr saturn as a baseball and play some ball, but you can also use the home run bat, so it's not a problem.

Very good point Dark Star (I'm still laughing at it). I personally don't care either way, I didn't use Ness other than to beat all three modes with everyone.

I hated Ness anyways, Lucas is a cool kid.

Lucas is high tier material, and his Pk fire is superior to Ness'. ALSO Pk thunder does not dissipate when it hits someone, it can pass through an enemy multiple times, and when it hits Lucas and he launches into you it's an attack. Finally anyone who THOUGHT Ness wasn't in this game, you fail.

Lucas and Ness are NOT the same. I have played it. Ness's yo-yo is weak, Lucas's up A and Down A moves are really strong. They look like yellow PK stuff. And if a character has around 40% Lucas's up A is instant KO and even if a character has 0% if Lucas charges the power of it all the way (hold up A) then it's almost always instant KO. Lucas down be heals faster than Ness and if someone attacks from the behind he will still absorb it whether it covers his whole body (which it doesn't) or not. And his pk thunder when it hits him goes farther, stronger, keeps going (keeps hitting the opponent) unlike ness, ness pk thunder stops when it hits some one. LUCAS IS awesome.