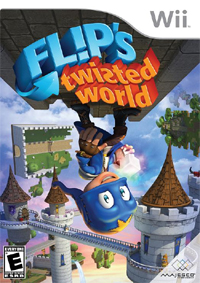 Majesco today released screenshots from Flip's Twisted World for the Nintendo Wii. A unique puzzle platformer with an innovative gameplay mechanic, Flip's Twisted World requires players to "think outside of the box" in order to escape a crazy cubed universe where nothing is at it seems.

In the game, Master Fulcrum's curious apprentice, Flip, messes with the wrong magic artifact and gets sucked into a cubed universe. To escape, Flip must turn the world any which way he can to reveal new paths and overcome obstacles. While adventuring through five bizarre puzzle worlds - such as an arctic glacier and a clock tower in the sky - Flip must stop the destruction of the universe and restore The Master's home to normal before he returns!

Players can twist the Wiimote to rotate the colorful worlds 90 degrees whenever they need to. Along the way they will collect five magic tools to aid in their quest home while meeting unique characters such as slugs, penguins and spiders, some that help and some that harm.

This game is said to be released during the first quarter of 2010. The screenshots mentioned can be seen on the Flip's Twisted World page.