Manaphy is a Pokemon all set to appear in Super Smash Bros Brawl. One that comes out of Pokeballs that is, it's not playable.

Its attack is unique, Manaphy performs a "heart swap", which means players temporarily swap bodies and start fighting as their opponent's characters. Your damage meter is still your own though, before you get any bright ideas about jumping over the edge. 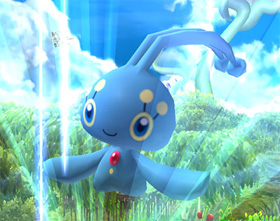 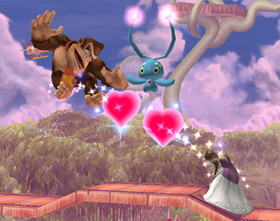 I now pronounce you monkey and wife. 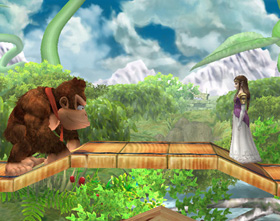 You may kiss the bride. 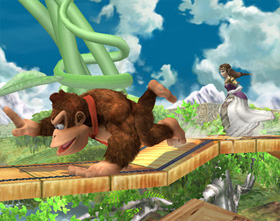 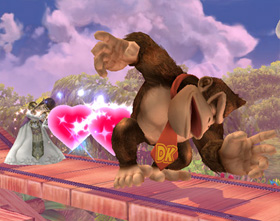 You forgot your tie press!

This is very unique.

That is so cool, it will make the game even more fun.

I'm confused. Are you controlling the other opponents fighters, or is it the other way around?

This can be either really cool or devastate you for a period of time. Manaphy is my new favorite Pokeball Pokemon.

Lol at the captions! She's mugly ha, anyways this is one of my favorite pokes yet, I mean changing bodies is a really cool experience.

What stage is that?

I remember in the 9th movie when Manaphy swapped Meowth with James, James with Jessie, and Jessie with Meowth and then later in the movie it swapped Ash with Jack and vice versa. This was a good idea to include with Brawl. I still think they should do a batch of Pokemon instead of having separate updates, though I guess you are acting like fillers. Anyway on to a more important matter, this Iwata Asks idea is great as we can finally understand what is going on behind the scenes like they said. And after reading through it, I'm surprised they didn't have the release date for December 2008! It was announced out of the blue that they'll be doing another Super Smash Bros. In addition to that, they are working with a lot of freelancers and instead of working with with stuff they already had in Melee (such as character designs) they are starting from scratch and are practically adding in features as they go along. And of course they suffer from the usual programmer's fumble: They can imagine what they want but they have a hard time trying to program it into the game, causing some features to either be not so good or abandoned altogether. Now this is what I like to know, they are actually telling us the problems they are having instead of just "appeasing" us saying "they got it under control". Because if they say "they got it under control", I'm going to blame them if their is a delay. But now that they are telling us the problems they are having, I'll forgive them for any delays because they were honest with us and I respect that. So I think that everyone should read that interview and accept any delays which occur.

I can see lots of confusion in team brawls, picture the scene: your teammate swapped hearts with opponent, throw him off the edge, just before he dies, swaps back.

What if there's more than two people?

Those heart look almost like the ones in Kingdom hearts 2! What if Sora's in Brawl?

Holy crap! Awesome update, awesome captions and thumbnail. DK, what is wrong with you?

Interesting. I like it. It could be a way to get back at someone who is being annoying and is spamming the same move over and over.

One more reason to master all the characters. Pwn teh n00bs that rely on one person.

That's cool. If you don't understand take Mario and Luigi for example. If you send out a Manaphy it switches bodies so everything is the same except you're different characters. Cool.

I love Pokemon and the first legend of the fourth generation. Hope palkia and dialga are in pokeballs as well. When I see pokemons their eyes are weird just like gluing paper to their faces.

Sonic Phantom, you switch characters. Like in the picture above, if you were controlling Zelda you'll now be controlling Donkey Kong for a short time. You'll switch back eventually, but you'll keep your damage percentage and lives so don't think on trying self-destructions as it'll just only effect the character you're controlling. Gina Beets, I would assume the closest two characters will be swapped. Brawler200, no, the hearts from Kingdom Hearts are longer in height and have a border around them, though I do wish Sora was in Brawl (along with Cloud, they can be the Square Enix Bad Boys of Brawl).

You should jump off the stage with your opponent's body at the last second.

DK is one lucky monkey. I wish I could swap bodies with Zelda lol.

Pichu fan, well reports from Whobby 2008 say that Darkrai and Shaymin are also in Brawl. Manaphy has been known for a long time, though it is only available in the Fourth Generation through Nintendo events and Pokemon Ranger. Hmm, I wonder if they have Fione also in being Manaphy's baby?

I admit, Mega Man has a better chance of being in Brawl than Sora or Cloud.

Actually, I think there's a game, Itadaki Street Battle game for DS (Japan) that has Mario and Dragon Quest characters, and Mario Hoops 3 on 3 has FF characters, so they have as good of a chance, if not better, than Megaman. Cloud, Sora, (although since Kingdom Hearts involves Disney, that might be less likely), or another FF character would be a great addition, but didn't Sakurai say 1 or 2 others besides Snake? So isn't there a good chance there aren't any other 3rd party people?

Wii's World, your captions and corner box things are hilarious.

The Crimson Artist, the Final Fantasy characters that appeared in Mario Hoops 3 on 3 were Ninja, White Mage, Black Mage, Moogle and Cactuar. Now what I think would be cool would be a Moogle Assist Trophy, it would float above the field and drop items here and there before flying off. But if they can't get Kingdom Hearts and Final Fantasy characters in the game, I would like if they could add music from it. Though I don't know any Final Fantasy music, I think that good Kingdom Hearts music for Brawl would be "Sinister Sundown", "Struggle Away", "The Fight For My Friends", "Scythe of Petals" and "Rowdy Rumble". The first 4 are in Chain of Memories, but the last one is from Kingdom Hearts II.