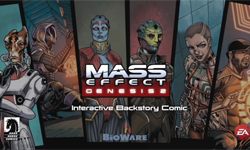 Over on the official Bioware blogs, the producer for Mass Effect 3 on Wii U, Melanie Faulknor, has written an update on what has gone into the game to make it a good buy for Nintendo gamers.

"The Special Edition includes our From Ashes DLC, the Extended Cut DLC, the Rebellion, Resurgence and Earth multiplayer packs, and a bonus heavy weapon - all on disc!"

"We are also including a new update to the Genesis interactive back story comic from Dark Horse we first released when Mass Effect 2 came to the PS3. The updated version will allow Wii U players to get the back story of Mass Effect and Mass Effect 2 and will allow them to make decisions at key story points. These choices will then create a save game for you that can be imported into the game, opening up more storylines for each player. So if you're new to the series, you can get caught up and personalize the experience. And if you've already played, you can choose a different route to see what things you might not have seen the first time around."

Bearing in mind that a Mass Effect Trilogy compilation is now out on other systems, this Wii U edition of ME3 could be a tough sell?

The trilogy is much better value for money for people who haven't played any ME.