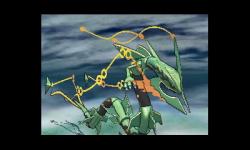 Rayquaza, the mascot for 2005's Pokemon Emerald, was shown to Mega Evolve and feature a new ability and attack. Mega Rayquaza's new ability, Delta Current, is a permanent weather ability that cannot be changed by other weather effects as long as Mega Rayquaza is in battle. It also makes flying type Pokemon take normal damage from moves that would normally do super effective damage. Its new attack, Dragon Ascent, is the most powerful flying type move in the game and can only be learned by Rayquaza.

In addition to the new ability and attack, Mega Rayquaza also receives boosts to nearly all of its stats, including its already high attack and special attack. You can check out Nintendo's reveal trailer below to see Mega Rayquaza in action.

How do you feel about this latest reveal? Do you like Rayquaza's new Mega evolution? Let us know in the comments, and keep checking back for the latest on Pokemon Omega Ruby and Alpha Sapphire.