Meowth will be one of the Pokemon flying out of the pokeballs in Super Smash Bros Brawl, as confirmed today by Sakurai.

Once he appears, he unleashes a slow barrage of... coins. Whaddya know. 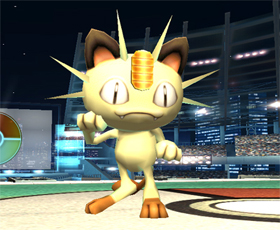 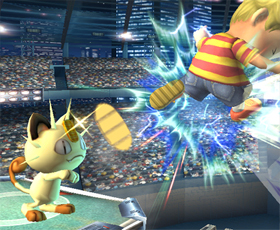 Coins up the wazoo. 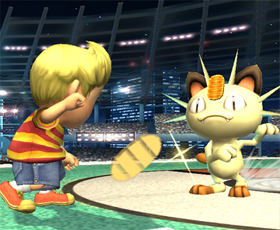 Where's Team Rocket when you need them.

Meowth is famous enough to become a playable character but for some reason (maybe lack of moves) he never is.

I'm not a fan of Pokemon but I like Meowth. I'm a cat person.

This is getting crazier and crazier by the minute. Every time we get a new character, I'm like really? Everyone is sure this game will be a smash hit, I wish it would come out already. None the less February isn't that far away, who knows what the game will be like by the time it's all said and done. A character I would like to see in this game is Knuckles. I know everyone is like Sonic vs Mario, but I personally think knuckles Vs Sonic would be be cooler and funner to do.

Notice that none of the Pokemon from the pokeballs show any expressions or anything.

I'd prefer somebody that doesn't suck as bad as Meowth.

People thought he would be a character. I wonder if you can suck up assist trophies with Kirby.

I don't remember meowth in the first ssb but if he was in he wasn't using pay day.

Talk about a cat fight! I'm sorry. I had to say it.

Oh god, stop the Team Rocket references. But I love the fact the Meowth's back. Another bit of nostalgia.

We can only hope that Team Rocket will be an assist trophy. All they would do is blast-off; it would be classic.

Does he talk? If he does, whack him away.

Didn't miss him in Melee.

He's wack. I'm never going to use him.

Weird, he used to shoot out coins in all directions like Weezing, except that it did insane amounts of damage if you were touching him when he started.

Wow I never thought that Meowth would show in the game, cool.

Gonzo, it's not like you can pick. And insultman, Meowth, y'know is a POKEMON! He doesn't come out of an Assist Trophy.

So he's not a charater.

Yeah he's a pokeball character again. He was in SSB for the 64 too. Hey, anyone ever notice that a new ssb only comes out with a new system?