Meta Knight's final smash is on the agenda today, in the Super Smash Bros Brawl update. It's called Galaxia Darkness.

With a swoosh of his cape, Meta Knight engulfs his opponent, and the rest of the field in darkness. Once it's dark, MK starts slicing his way around fiercely.

Be aware though, if you miss with the first swing of the cape, nothing happens and you've wasted a smash ball. 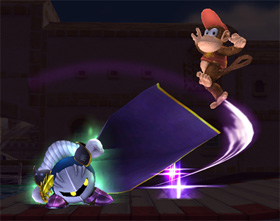 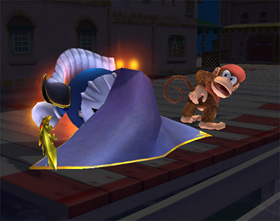 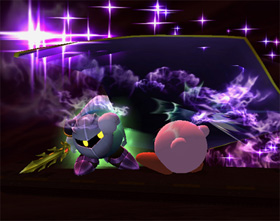 Ahh, camping out under the stars. 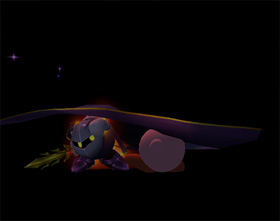 I'm gonna turn in for the night. 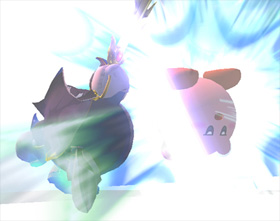 What's all the commotion? 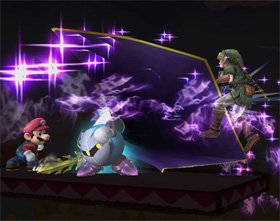 I think the tent's on fire. 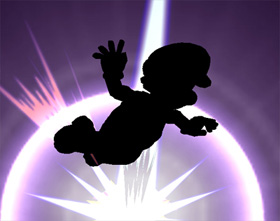 Come into the cape of wonder.

Day man. Uhahhh. Fighter of the night man. Uhahh. Champion of the sun. Uhahh. You are a master of karate and friendship. For everyone. Oh and meta knight's final smash is neat.

His sucks, because if you miss it doesn't do anything. At least Peach's Finale Smash hits everything and everybody.

For Meta Knight's Final Smash, this is kind of bland. He simply throws his cloak, darkens the screens, and slashes whoever is caught or runs into it. I expected it to be a bit more forceful but sly at the same time.

It's stupid how his cape has to hit someone, but it's a pretty awesome smash.

Cool smash but kind of boring at the same time.

It's possibly the worst one yet, but that's most likely because he's too good without the Smash Ball. But either way I was expecting more but this will probably do.

I wish it was awesome-er, but still okay.

This is my favorite final smash so far. It's awesome. Oh, and if you see the E 4 All videos, you can easily make a 1 hit KO with this attack.

Yeah, not much special about this one. Cool looking, but kind of impractical.

Well think about it, everyone's going to be after the Smash Ball, so if Meta Knight gets it, there'll be plenty of close targets.

Any ideas or theories on Meta knight being a villain or hero? (I know I have similar post on the other Meta knight updates. The reason I put one on this one is it's going to have more people check it than month old ones).

No, not stupid. Adds some strategy.

The sword effects look pretty neat, especially since the background is dark and when Meta Knight strikes, light EXPLODES! Plus, no one can fight back since the damage just goes back to them.

I already knew this, it was in the efa demos. Sakurai please I want a new update.

It's stupid that the cape has to hit someone first. Maybe the cape has a wide range or the slashes do some serious damage. I'm beginning to think that they should have left out final smashes altogether.

I expected his final smash to be that giant cyclone he throws like in squeak squad.

Not as good as the other final smashes I've seen.

His FS is ok, but I agree Peach's final smash is better.

This is a very good final smash. I know you have to make a hit on an opponent for it to work but think about it, when you go for a smash ball a ton of people will be near you because they'll have tried to get it too so the chances of meta knight scoring a hit is pretty good.

I would have thought he would use his ship because it's so massive and powerful.

Meta-Knight is one of the fastest characters, he's obviously going to have a sucky final because he'll be getting the ball more often than others. That's why Bowser's smash is so cool. Though I can't think of why Fox's is so overpowering while the slower DK is pathetic.

Thanks Aeth, that makes three (those that responded and myself) that think Meta Kight is going to be a good guy. And also I am almost 100% sure that Wario is with the Sub Space army because of the gun he had. It looked like nothing I had ever seen in a Wario game and it looked similar technology-wise to the SubSpace bomb.

I hope Meta-Knight is introduced as an anti-hero who is hell bent to get back his ship from the SubSpace army no matter what or WHO stands in his way. That would be AWESOME.

I expected his giant energy pillar technique that he's used many times before. Well this will have to do I suppose.

I think Meta's good. Either his ship was stolen or he's got a plan to turn on the Minister (because he's just awesome like that). Meta Knight has NEVER been a villain, only a rival or a mentor, for years! Why would Sakurai, his creator, make him a total bad guy, something he has never been in Kirby history. Sakurai even said on the early Brawl site that Meta Knight was gifted with chivalry, not exactly a villainous quality. Also, if you look at the post "What is the Subspace Emissary?", it shows Meta Knight dealing some hurt on some Subspace critters. If he was with them, why would he be fighting them? Make it another one who thinks Meta's a good guy.

Dang, Meta-Knight is by far one of the coolest characters in the game. I'll be doing some major pwnage with him online!

It should have been like in Kirby's dream land (1) he jumps to the top of the stage and disappears (2) he summons the swordmans.

In a video I saw yesterday Samus and Pikachu were running inside a ship together. I wonder if they were looking for the other Princess and Meta-Knight. Maybe?

I was fairly disappointed with his Final Smash. Summoning the Meta-Knights (his soldiers), or some kind of Halberd firing from the background would've been better, but it's alright. As long as it hits.

That Final Smash is very useful if your opponent has over 50%. And Peach is #1, you obviously think that Peach's Super Smash is unavoidable? COME ON. All smashes have flaws. All you have to do is stay away from Peach in mid-air. Easy.

Meta Knight is my best character. When I play as him or Wario on Wi-Fi I never lose. Also, try getting the opponent's damage to around 50 or so, then go near them and use your up special attack (and don't fly off and die!). Try to use regular attacks to get damage meters up. Oh, and another thing, Meta Knight is good in the air, so go for aerial combat.

Meta Knight lost his ship to the Sub-Space armies, in one of the chapters he is in the cockpit with cloned Mr Game & Watches made of shadow bugs. Peach's Final smash sucks because it's easy to avoid on any stage and you can't even aim it. It has no knockback and what good attacks (except peach bomber) does Peach have? Meta Knight has the fastest attacks in the game and 3 good KO attacks (excluding galaxia darkness). All FSs have flaws in them. MK can fly and glide so he has the ultimate recovery.

I was thinking that he'd call Sword and Blade and the three of them would run around slashing characters and then POWN them with a combined Sword Beam. But I guess not? Oh and in Kirby Super Star and Kirby Super Star Ultra, Meta Knight was evil on Revenge of Meta Knight. But was good on Meta Nightmare Ultra. If you guys were wondering Knuckle Joe's father's name is (it's a fan name), Jecra. Hoped that helped you guys any!