Miis going to the olympics

A playable demo of Mario & Sonic at the Olympic Games has been going around Australia on the "Wii Connection Tour".

The character selection screen (see below) now suggests Miis can be used in the game. 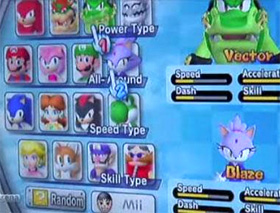 If you've ever wanted to race against Sonic, this is probably as close as you'll get.

That's not Jebus! He's on vacation on Mars, or so I was told.

I love the Jesus Mii. I have one of those.

Very cool! I wanted to see a Mii version of myself racing Sonic. This game will kick major ass.

Wait, so does that mean we can use our own Mii's to race. If so, that would be a great idea.

I've always wanted to go to the olympics with my favorite mario and sonic characters.

That seems pretty cool. All you have to do is make a mii that looks like you and it'll seem like you're in the game.

Heh I'm going to make a Jesus Mii and he'll win EVERYTHING!

Man, I wish this game had long distance races. I would own at those just like I do in real life.

Wait how do you set the stats for your mii, are they balanced out, or are they fast?

My screwed up Miis are going to see light at the olympics.

I just think this idea is totally lame. Mario versus Sonic in a foot race. No. Sonic wins, hands down. At least they're making history.

I actually might get this. Pretty cool. And I am making a jesus mii now!

So, wait. VECTOR is the last Sonic character? Then how come we didn't get Charmy? Oh well. Hey, at least this means I can put my Link, Zelda, and Pikachu Miis to good use now.

I've got birdo mii! She's cute. Birdo has got a friendship with yoshi. She loves his humour.