Wii gets Medal of Honor Heroes 2

Those Nazis, when will they learn. Reggie Fils-Aime, Nintendo of America's big man recently announced Medal of Honor Heroes 2 will be coming to Wii this holiday season.

Published by EA, it's built from the ground up for Wii and will support online play with an impressive 32 players.

In addition to the standard single player campaign, a special mode designed for new gamers will be included. This section will be on rails and simplifies the experience, so even the most clueless newbie can still pop a cap. Nice! 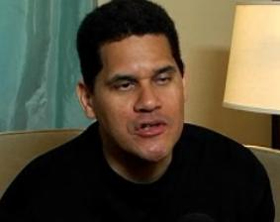 Sweet! Nintendo knows what they are doing in putting online in. They finally caught up to Sony and Microsoft in that department. I also believe Medal of Honor is the best WWII series. I remember in Frontline Assualt when the D-Day battle commenced. It was near impossible to get past to first ten seconds.

I just bought vanguard, and I'm pretty happy with it so I'm definitely getting this.

Looks like Reggie forgot to pay his dealer and got the punishment accordingly.

It will definitely be better than the PSP one, since it has the zapper.

Sweet. I hope this sets a standard for Wii fps's, Online play with 32 players. Nice. I've got to get this if it's good.

Nice shot of reggie WW, way to make him seem more special than he already is (you know because he's Nintendo president).

Man this guy is scary. They should do a surviving horror game about him.

If you think about it, reggie sort of looks like gordon brown.

I can't wait to get my butt kicked online.

This is a must have, multi, online war game.

Reggie Fils-Aime once killed a man 100 yards away simply by standing up. He's that awesome.