Today, Ubisoft announces the development of Monster 4x4: Stunt Racer for the Nintendo Wii console. Monster 4x4: Stunt Racer puts Wii-lovers back into the driver seat for a whole new race. Gamers of all ages will enjoy even bigger wheels, faster trucks and crazier stunts which made Monster 4X4: World Circuit the second highest selling driving game on the Wii ever.

Whether you're grinding through inner-city construction sites, crunching out-of-town canyons, or scraping through exclusive wall-driving features, players will be able to perform vertical stunts and find shortcuts as they take on their friends and family in 4-player split-screen modes.

Tony Key, Ubisoft: "Monster 4x4: Stunt Racer is a game the fans of Monster Truck World Circuit have been restlessly waiting for. Gamers will get to experience more excitement, upgraded features and the exhilarating action of steering the world's most powerful trucks while tearing through new extreme off-road racing circuits." 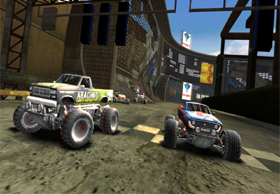 A batch of screenshots can be seen on the Monster 4x4: Stunt Racer page, it's due out this Fall.

They already did a truck racer on Wii ubisoft, BS again. 3rd parties it's getting silly now.