Another assist trophy has been announced for Super Smash Bros Brawl. It's Mr Resetti of the Animal Crossing franchise, and he looks angry.

He comes equipped with a hard hat and pickax, but his favorite thing to do is bust out a lecture. Something tells me he's not going to be well liked. 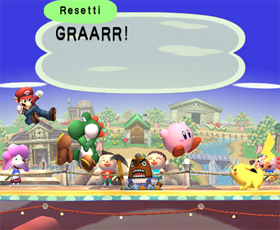 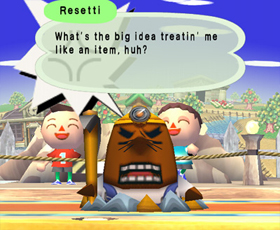 Assist trophies have feelings too. 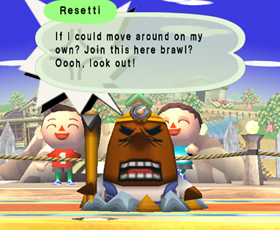 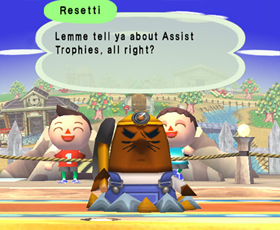 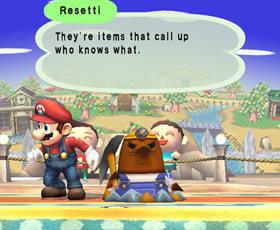 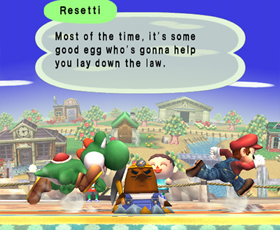 Yea but sometimes it's a lecturing mole. 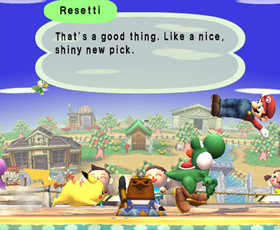 Can we do this another time Resetti? 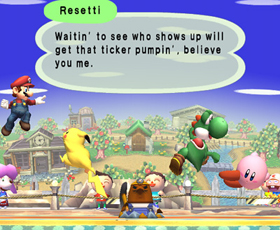 We're in the middle of a brawl right now. 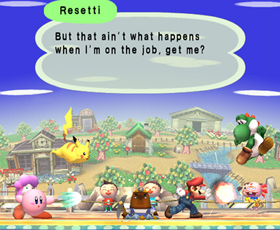 Resetti, this is dragging on. 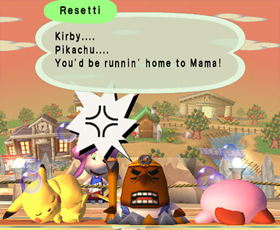 We're out of time.

Kind of a neat update today. This makes me look forward to having an AC person to play as after seeing the AT, Stage & Item hopefully there will be one.

Man, this guy is real annoying! He's worse than the devil.

I bet this is an annoyance, but interesting nevertheless. I wonder if they are going to cut/reduce the pokeball's pokemon rooster with this whole assistant trophy thing. Not that I'm a pokemon fan anyway. I just wonder.

I wonder if he would say anything funny if he popped out on one of the collapsible stages and fell off the stage! HELL'S BELLS.

I don't see the benefits from this. At all.

I love him. My new favorite thing in brawl. Oh my god.

I love Resetti. As much of a nuisance he can be, I still love him. It's good to see Animal Crossing being represented in Brawl. Now if we could get some Pikmin stuff in.

I wonder if you'll be able to turn him off on some menu or something.

Oh my god what a power.

That would be really weird. I just realized that if someone was stuck in a pitfall and then the floor collapsed (like in SkyWorld), what would happen to the person? Plus, in the jungle stage, Mr Resetti would be falling at the bottom of the stage. This is kind of of like a annoying togepi that talks. When togepi makes you fall asleep?

Hey! It's the assist trophy form of Goldeen.

I think he comes with ear plugs so everyone but the guy who used him falls asleep at the end of the lecture.

The people he speaks to fall asleep, like in real life.

This is pretty funny. Something that's there to piss you off. I wish that when he first appears when he's pissed he swings his pickax around a bit, or throws it at someone.

From the looks of that last panel, either they did that to be funny, or he puts people to sleep.

This update has the most screenshots yet.

It looks like he puts your opponents to sleep. Look at the last pic.

No offense to Nintendo but that's the dumbest asist trophy I've seen so far.

I knew it. Great! I knew something AC would come by. Now next is Olimar from Pikmin! (not an assist trophy).

Even more distracting than the puppy. Anyone up for some multitasking? Hopefully he says something different each time he pops up, like in AC. To be honest, I stopped resetting my game after he threatened to erase my town. That mole's a scary guy.

You know it'd be better if Nintendo would give him legs and make him a playable fighter. Then as his smash attack he could lecture and make people fall asleep, then just throw the others off the edge.

He'd probably get annoying. I hope the text bubbles just pop up, not him actually talking.

This is an extremely cool update. This is the kind of creativity that is going to make Brawl a memorable game. It looks like his lectures and rants can be character specific. So look forward to having your characters insulted during matches.

I'd rather have tom nook.

The point is he puts anyone near him to sleep. How can you say that isn't useful? FREE BEATINGS.

This update is rubbish, it's just like in super smash bros melee where fox or falco call the star fox team, all they do is talk.

This is a pretty bad update. This guy will be the first Assist Trophy I take off the list.

I wonder if you can just smack him back in his hole like "whack a mole".

But he puts anyone close to him to sleep. Can you say FREE BEATINGS?

Wow, the zoom's going to be hecka annoying, but I LOVE the extra humor put in. Mr Resetti, you're my favorite Assist Trophy so far.

I love this. He's an assist trophy, but doesn't assist you at all. He's just meant to be an annoyance-he's constantly jabbering, and he makes another obstacle to hop over. AND if you look closely at the last pic, he put kirby and picachu to sleep with pure boredom.

Well, I love Resetti, he's really cool. This is just boring though; he could at least start attacking people with his pick and shout at them.

In animal crossing, he was your worst nightmare.

The thing I like about him is that he makes funny lectures in animal crossing.

He's supposed to be like goldeen or something but he also puts people close by to sleep.

Heh- I spent about an hour in practice mode just opening assist trophies to hear what he has to say. I wish I had the DS or GameCube game of Animal Crossing, he's awesome.

I ran into him and boy was that weird.