There's a strong Mario flavor to today's Super Smash Bros Brawl update. It's the Mushroom Kingdom like you've never seen it before. The infamous first level from Super Mario Bros has been recreated but with nicer looking backgrounds. 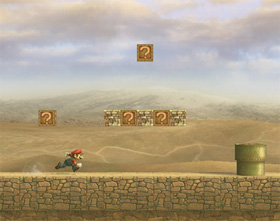 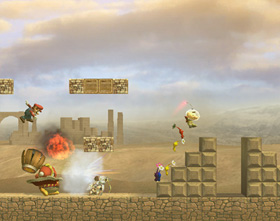 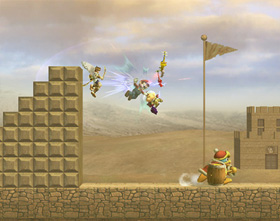 Guys, I bet you she's not in this castle. 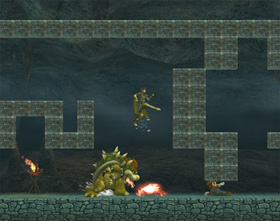 There's also a reworked Mario theme tune done by the one and only Koji Kondo.

It almost reminds me more of Transport Tycoon than Mario Bros.

So sonic's stage is going to be obviously green hill. Also Luigi has to be in the game now.

Well the stage is alright. It's something new but the music isn't very.. fighting-like.

Great update. The way the stage side scrolls reminds me of the rainbow cruise and the fact that you may appear on level 1-1 or 1-2 is bound to make things interesting.

Not too impressed but it's ok.

Sweet stage. I like how it is ruined because super mario bros was made 20 something years ago.

Wow. This is amazing. But is it only those 2 stages or are there more?

Cool, this is a creative stage and seems like you could use the blocks and the background in 'make your own stage'.

Looks kewl, I wonder if when you get the second part of the stage, what if you go on the top to the not so secret pipes, do you die or what?

Looks cool, but I remember the level being a lot, er, greener.

Ah, let us bask in the glory days as classics never die! The music seems kind of gentle to fight to but it does fit since the stage is a remix of World 1-1 and the music is too. Also interesting that you may wind up in the underground.

They should have kept it the same.

Schweet! I wish they showed more underground screens though.

I like how they make it look old and abandoned. Kind of makes you remember how much time has actually passed since we first saw world 1-1.

I like how they made this stage again! But why does it look so deserted?

I wonder if you can break the blocks in the last panel.

I wonder if there's any hidden item boxes.

Ain't this cool for all of us! Too bad it can't be used as a bonus level.

Hmm, I think I would have liked the stage more if it were lively and colorful like the actual game, but not with the old graphics. Updated graphics are a must.

I like this Stage a lot, it has my vote on one of the best stages in Brawl! Oh, and I like the song too.

Is Mario throwing a huge fire ball in the second image?

Very nice, bound to be one of the most difficult stages to brawl on. I like the 2 in 1 stage idea though. And another serene fight song. What is this, "The Good, the Bad, and the Ugly"? (one of the few movies that has a fight scene to peaceful music).

I love jazzy tunes. This qualifies.

Wow I like this a lot! On the official site it says it's the very same one, deserted after all these years. Pretty cool.

Song is awesome and I just love how they made this stage all desert like, which for those of you that don't know know is because it symbolizes that we gamers have moved on to other games. Kind of emo though, just think of it, every video game ever made is just dust in the wind! (song note at the end).

Good, a classical stage. The best remake of an old stage. Even though the stage looks beat up.

Not a bad level, I'm glad it's in ruins. The music seems a little slow, but what do I care. It's Super Smash Bros.

Neil, I think it was King Dedede's Hammer in "Jet Mode". They'll most likely have the Mushroom Kingdom 2 stage from Melee, but we haven't seen any old stages from the original Super Smash Bros be announced yet. Hopefully some will.

I actually hope they also have a more true to the first game version as well.

Pretty neat idea. If they make a mushroom kingdom stage based on how it was originally, then I'd be happy.

Classic games never die, they just get dusty and rust.

This is so super cool. I love how they remade this stage. I love this better than Melee's version.

Transport tycoon was the best tycoon game (except rollercoaster 1) and it's one of the only ones not to get a sequel. And yeah interesting.

It's sad to see the mushroom kingdom this way. But the stage is still awesome.

Imagine if the level scrolled through the whole game? That would be pretty epic.

Check out the Japanese version of the wifi video from yesterday and you get a whole different video with Kirby's Ike hat. It teaches more about Kirby's final smash, like how it can be used in midair and Kirby stays in the air during it.

World 1-2 only appears occasionally, most of the time you will fight on 1-1 (the starting stage).

Why doesn't Smash Bros let you download their awesome music?

I'm likin' the music. And the Mushroom. My Kingdom- the aftermath of The Subspace Emissary, dontcha think?

They took it from 8-bit to real life.

Koji Kondo is the BOMB.