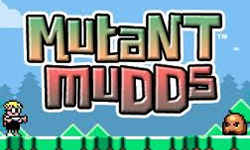 Fans of Mutant Mudds were treated to 20 free levels in the new downloadable content recently. The fun doesn't stop there though, developers Renegade Kid have confirmed we'll be battling many more mudds in the future:

"Yes, we plan on releasing Mutant Mudds 2, and it will be a 2D platformer. We also have a Wii U version coming out, called Mutant Mudds Deluxe."

this is a great game and now the wiiu will have it!