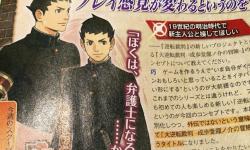 With a new character and an interesting new setting

This new entry appears to be slightly different from previous titles. The game will be named Dai Gyakuten Saiban - Naruhodou Ryuunosuke no Bouken, or, translated, Grand Turnabout Trial - The Adventures of Naruhodou Ryuunosuke (i.e. the original Japanese name of Phoenix Wright). The game apparently takes place during Japan's Meiji era in the late 19th century, which for those who know their history was a period of great transition for Japan.

Ace Attorney games thus far have largely downplayed the series' Japanese setting, making a localization potentially difficult. There is currently no news of a western release, but given that the series is one of the few Capcom titles to reach financial projections in recent years it seems possible.

Stay tuned for more information on the title at Wii's World.