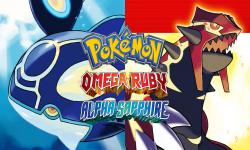 And Pickachu takes up Cosplaying

A new video on The Official Pokemon YouTube Channel on surfaced today, revealing multiple new features to the game.

The video begins revealing some of the gym leaders and Elite Four, but then also reveals some of the mechanics that will be found in Omega Ruby and Alpha Sapphire. The first of these mechanics shows a Poke-Aime - Style interaction screen in which a Pickachu is wearing different outfits, which could possibly relate to the return of Pokemon Contests.

It is also revealed in the video that Secret Bases will be making a return, and that they can be shared with the world and fully customized, just as in the original Ruby / Sapphire / Emerald games.

The video ends with the revealing of a new Mega Evolution: Mega Metagross.

Pokemon Omega Ruby and Alpha Sapphire will be released on November 21st.