New Pork City is the 14th stage revealed for Super Smash Bros Brawl. It originates from Mother 3, so it's effectively Lucas' home level.

Sakurai claims it to be one of the biggest stages around so far, comparable in scale to Temple. There's also a beast that roams around known as the Ultimate Chimera. 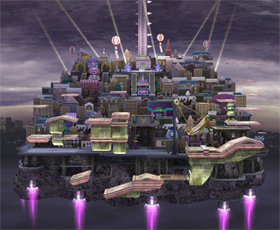 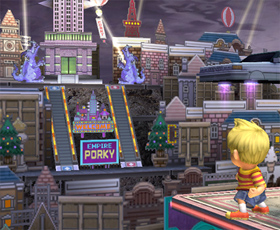 Billboards are ok, but where's the bathroom? 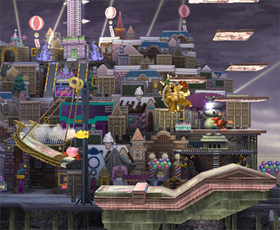 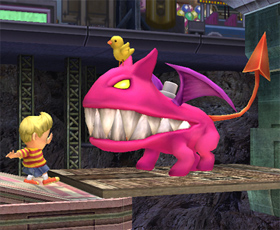 Did you just call me Piggy? 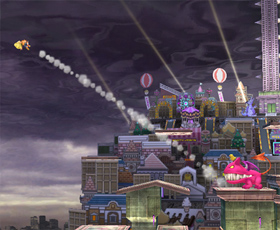 Looks kewl, I'll probably play on it quite a bit.

This stage looks so amazing. Brawl is going to take gaming to the next level.

That Ultimate Chimera is hilarious. I like the little ducky. Also, Hyrule Temple was one of my favorite stages so this one should be awesome. I wonder which past stages they will bring back for Brawl.

I absolutely love the ducky on top of the chimera. Without the duck the chimera is powerless. All worship the duck. Oh yea and the stage looks neat too.

Now all they need is a sonic stage and a mario stage. Great stage though.

This is awesome! I like big stages, and this one looks interesting. I just hope the computer isn't stupid enough to always kill itself from the ultimate chimera.

Cool, looks like we have a stage with a proper enemy instead of wimps like birdo from SSBM.

I am going to love this stage.

That seems pretty cool. The Temple in Melee was actually from Adventure of Link on NES and was also my favorite stage.

I have to say this is one of the neatest boards I have ever seen, it's beautiful.

Why does the chimera have a duck on its head?

My favorite stage so far.

Pretty cool, but nothing worth being really surprised about.

Awesome stage! It looks way more interactive than Temple. This is going to be sweet.

That Ultimate Chimera scares me.

I love that last caption. I love this stage. I'm a fan of the bigger ones anyway.

Whoa, big stage. Maybe even bigger than Temple. Wonder if it will have screen scrolls or not. The Ultimate Chimera thing looks kind of weird though. Kind of REALLY weird.

That's a nice parody of new york city, plus an awesome stage.

In the third pic, what was it that hit bowser? Looks like a pokemon. This looks like an awesome stage. It's huge.

So we call it the big Pig instead of apple. Amazing.

It's a cool stage but why's it called new pork?

This level looks good for aerial combat. Say having meta knight, pit, ridley (let's hope) and even the super charizard. Another thing imagine if the chimera takes a disliking to the pokemon trainer and goes for him!

Goomba, take that hat off right now! Sorry that was the Met fan side of me yelling, anyway, this stage looks pretty sweet, sakurai said that it's bigger than hyrule temple from melee.

Why is it floating?

I loved the temple stage so this is gonna be good.

It's the stage of who? From what game?

It's from Lucas's games Earthbound/Mother.

The chimera's pink! I love pink.

For the ones wondering, this is from Mother 3 (AKA Earthbound II, never released stateside). The "Ultimate Chimera" is not really an enemy from the game, just a big creature in the city that, outside of battle, will chase you around the city and, if it touches you, kill you instantly. And that button on its back is its off-switch, but that's what the little birdie thing is for. Turn the chimera off and the birdie gets pissed and turns it back on.

Do you have to get that duck on ultimate chimera?