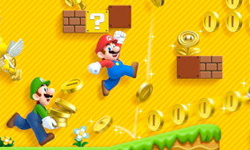 Coin-fest New Super Mario Bros 2 has Nintendo's Iwata and co running to the bank too, as sales figures in Japan have passed the million mark in just five weeks. According to the latest Enterbrain chart, NSMB2 has sold 1,068,878 units, making it a faster seller than Super Mario 3D Land - which only took eight weeks to get there itself.

NSMB2 is also available to buy as a digital download through the 3DS eShop, it's unknown whether these sales are included in the figures - and if they are, what the ratio is.

I'm not sure why people would go for the download option. They're both the same price, and a cartridge has resale value?