Much like they did with the DSi, Nintendo has revealed plans to launch a larger version of the 3DS handheld. In a Nintendo Direct video dated June 21st, the new Nintendo 3DS XL was showcased.

The XL has 90% larger screens and aims to provide gamers with an even more immersive 3D experience. It comes bundled with a 4Gb SD card to store games and videos. The XL's battery life is said to outperform the original 3DS'. Here's the release lowdown: 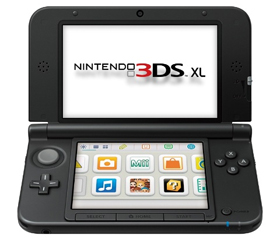 Europe getting this earlier and with more color choices? But I wanted silver!