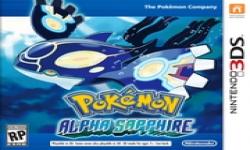 In an announcement that should surprise virtually no one, Nintendo has announced another yearly installment of their Pokemon franchise. Pokemon Alpha Sapphire and Omega Ruby will be remakes of the original Game Boy Advance titles, supposedly with the features and creatures from Pokemon X and Y.

Nintendo has released Pokemon titles yearly since 2011. Pokemon X and Y are Nintendo's current bestselling 3DS title amidst a third consecutive quarter of losses. The Pokemon franchise may be starting to sag from over saturation, but only time will tell. The remakes will be released in November 2014 worldwide.