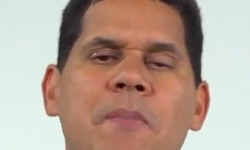 Wii U and 3DS news en-route

Nintendo of America has sent out a press release and also tweeted about a Nintendo Direct video happening tomorrow, on December 5th.

These videos presented by handsome Reggie (pictured) and friends are usually a juicy source of new information, so it's worth tuning in to see what's up and coming for Wii U and 3DS.

If you can't watch the live stream, check back to Wii's World later on and we'll tell you all about the important bits.

I love these videos, they're usually very informative.