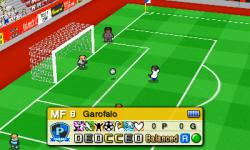 A little while ago Nintendo announced something rather out of the blue for them, but it came as a nice surprise in my eyes.

For the continent of Europe, there will be a eshop game called Nintendo Pocket Sized Football. It plays similar to any soccer/football management titles such as Football Manager, it's a simulation where to take charge of a football team and you aim to be the best there is. However, this game plays similar as an RPG when you upgrade your weapons. You weapons in this case are your players, you can collect cards and aim for the top.

The single player mode lets you manage your team when you start them from scratch. You get to design your own kit, emblem and even give your team a name. The action looks frantic, yet it has an adorable feel to it. Online gives you the chance to kick some ass and become the highest ranked team not only in the country you are based in, but also in the whole continent of Europe.

There are 5 different aspects of the game which will get you through to either becoming a wild scoring team or a team doing so bad it makes Manchester United's form look sparkling.

Stadium gets you straight into the game, as it's a managing simulator don't expect to get too stuck in the action like you would on Fifa or Pro Evolution Soccer games. You manage from the bench to communicate with your squad, and you collect trainer cards which you give to your players to train them up. Team Camp is your training facility, whee you give your cards out, plan formations and add other items to players to make them stronger. The Office part gives you a chance to buy and sell players, change around your kit and change your line up for the next game. The last two are Federation and Airport, that deal with scouting coaches and players respectively.

They are all brief descriptions of what this game will be, it's a great chance for Nintendo to get something other than Mario to offer a football simulation game that can reach around to millions of people. It's a shame no one else besides Europe is getting this game, the price is £10.79 ($18.14) until 1st May when it will increase in price by a few pounds to £13.49 ($22.68). The price might be quite steep for an eShop game, but from what I'm seeing it looks like a great chance for football/soccer fans to dip into the world of Nintendo.

To see some of it in action, here is a link for y'all!