Nintendo - Why Miis are in NSMB U 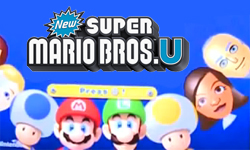 It's Toads or Miis

It's probably fair to say most of us are looking forward to New Super Mario Bros U on our new console-to-be. One thing which could be considered a snag, is that in multiplayer games Mario and Luigi are joined by two generic Toad characters. This will continue to be the case, unless you choose to play as a Mii character. In an interview, Nintendo's Takashi Tezuka was asked why alternative characters like Wario or Daisy were not included:

We did consider that when we looked at which characters we would use. We really came down on the side of using Mii characters rather than some of the characters you had mentioned. Through the technology of HD, you're going to see more expression and emotion on the Mii character faces. Of course, we're going to continue making Mario games, so you can maybe look forward to some of the things you were asking about in the future.

Perhaps it was also easier to implement from a developer's perspective. If you've ever wanted to see yourself inside a Mario game, New Super Mario Bros U will give you that opportunity.

I don't really want miis in my Mario experience, but at least they're optional so it's fine.