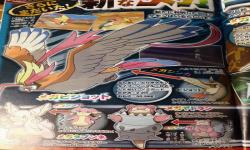 Bees, and birds, and dragons. Oh my!

The newest issue of Japanese gaming magazine 'CoroCoro' has been translated and reveals new information for Pokemon Omega Ruby and Alpha Sapphire. The first new information is two new Mega Pokemon, Mega Pidgeot and Mega Beedrill will be available in the games. Mega Pidgeot retains its Normal/Flying typing. It receives a boost to special attack while gaining the ability No Guard. This will assure that every one of Pidgeot's attack will hit without fail, but grants the same effect to your opponent. Mega Beedrill also retains its typing of Bug/Poison. It will get a boost to its attack and speed while gaining the ability Adaptability. This ability will change Beedrill's same type attack bonus from x1.5 to x2. Two additional Megas were shown in the form of Mega Latias and Mega Latios. These Megas were previously found in the coding for Pokemon X and Y, so their inclusion isn't much of a surprise. Latios and Latias will be exclusive to Omega Ruby and Alpha Sapphire respectively, just as they were in the original Generation III titles.

Other new details for the games include the addition that CoroCoro will distribute the Eon Ticket in Japan. This returning item will allow Omega Ruby players to obtain Latias and Alpha Sapphire to obtain Latios. Details on this item being distributed outside of Japan have yet to be revealed. Several legenday Pokemon including Zekrom, Reshiram, Palkia, and Dialga will also be available in the games. A new item called the Eon Flute will allow you to ride on the back of Mega Latias or Mega Latios. While on their backs, you are able to fly over the world map and encounter wild Pokemon within the clouds. The previously mentioned legendary Pokemon will be obtainable within special clouds called Myhical Places. With Omega Ruby and Alpha Sapphire, all non-event legenday Pokemon will be obtainable using the four Generation VI games.

Are you looking forward to these new Megas? How do you feel about these new sky battles and being able to obtain more legendary Pokemon? Do any of these changes change your opinions on these games? Let us know in the comments below.