Much-loved publishers Codemasters have announced that Overlord is to have new games on the Wii and DS. 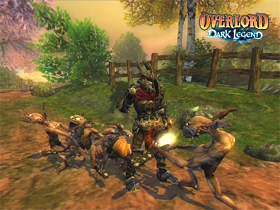 "We used Pikmin as inspiration, of course - but also games such as Sacrifice; which involved a central character who controls hordes of followers. However, I feel our core mechanics and setting are substantially different and the games differ much more than typical shooters strategy titles. So I say to anyone claiming Overlord is a Pikmin clone - check yourself before you wreck yourself, fool".

That last line may have been tampered with. The DS handheld version of Overlord will be called "Overlord Minions", said to be more of an action-puzzle spinoff. Neither game is expected until 2009.

I really enjoyed overlord on the xbox, hope this one uses motion controls well or not at all.

Lots of 360 games are being ported to the Wii. How's that for hardcore?

Think of this "migrating" as a sort of a global warming, say. The icebergs are melting and the polar bears are moving to the other continents.

Sa' weet, now to laugh at all the ExBox fanboys.

If xbox games are now being converted to Wii, I hope we get Halo.

Oh god, this game is horrible, it's a failing rip off of Pikmin.