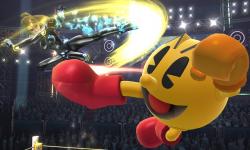 We were all waiting for this moment

When Super Smash Bros. 4 was announced I was pretty darn sure that HAL Laboratory would develop it as they have done previously. However, Nintendo chose old chums Namco Bandai to develop their titles.

After Nintendo's E3 conference we had some of the best news in a long time, from things we expected to the unpredictable. However, we all (well, I did anyway) saw this announcement coming from a mile away, and that Pac-Man will be among the fighters in the new Super Smash Bros games.

We've already seen Pac-Man and his lady in the arcade versions of Mario Kart, so it's now time for the fat yellow muncher to nom and kick his way through all the Nintendo characters.

E3 also featured two other newcomers that will clench their fists for a brawl in the 4th installment of Smash Bros. One of these is Kid Icarus' Palutena with the wonderful outro to the conference in an anime styled animation.

The other one is the Mii, which is now becoming a heavily popular thing to include. The growth of including Miis has grown since Wii games like Wii Sports and Mario Kart Wii using them. With the Miis there are different ways to set them up, sort of similar to the Pokemon Trainer in Brawl (who has been scrapped, but Charizard remains). You can have either your bare knuckles, your trusty sword or your arm cannon to take on the roster of characters that are ready for a good fight.

You reckon anyone else is fit for a fight for Super Smash Bros? Let us know in the comment section what character you expect or want to appear.