Sakurai's treated us to two Smash Bros Brawl updates today. This one is a stage, named Pokemon Stadium 2. The previous game Melee featured a Pokemon Stadium as well, but this has been upgraded.

As the battle goes on, the environment changes into one of four things: 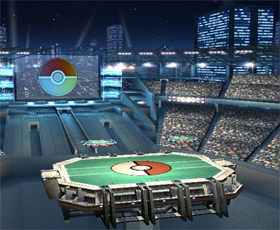 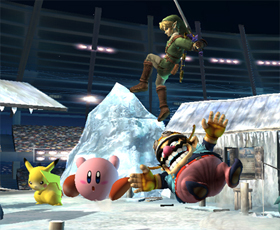 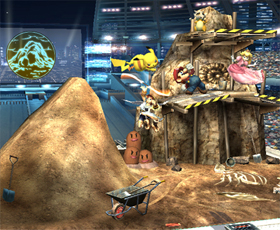 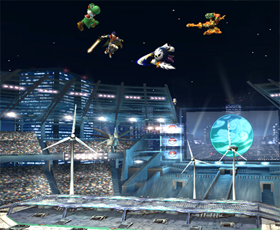 I can see my house from here.

What about the eletric type?

Is that cubone and dugtrio a pokeball or just part of the stage? This is the best stage yet.

I wonder what the electric is.

They should show more Pokemon! I only saw Dugtrio, Cubone, and Skarmory. Oh well. Great stage.

We always needed another pokemon stadium.

Hey! There are some of us Mexicans that are as competitive and professional as any other. Seriously, nice captions. But Easy on Mexico, OK?

MAN! Good thing hurricanes don't happen in video games or that hotel is coming down.

I coulda sworn I saw a Skarmory on the 4th one. And where's the electric stage?

I knew they were going to have the pokemon stadium.

Don't ask mexicans to build your hotel. That is funny.

Cool update, but what does the electric stage look like?

I really like the new adaptations. They made the battle interesting in the previous stadium stage. Wonder what the electricity one looks like. Factory?

Hey captain jamesman! There is a skarmory! It's under ike.

Very cool stage. I love the changes in Brawl.

I can see my house from here, old, but it's a classic.

There's a cool advantage for mario. He can use fludd and blast em really high and you'll do a star ko.

They're not showing the electric stage because they want it to be a surprise (like the castle stage underground). C'mon do you all not know how to tease.

I love the flying mode, seems like it's going to be pretty challenging to fight like that. The ice mode seems really annoying, much like the UFO in Melee.

There is (I think) also a drifloon hanging in the middle of the screen! That will mean: 4th generation.

Mexican hotels are better than you think. Ever gone to one? Te actualization was indeed grat, imfao.

The flying mode looks awesome. I always loved fighting the wireframes in adventure mode and getting enhanced jumps.

Flying stages are awesome! I had a unique idea for a flying stage myself. Remember the big blue stage in SSBM? The platforms are constantly moving and standing on the floor would send you sliding out left field. Well, what if this type of stage were vertical? An idea came to me called Everfall. A stage where everything is falling slowly upward, and the characters slowly fall downward and platforms come up from below, it could loop indefinitely like the mute city stage.

I always wanted the stages I think of in brawl. An underwater stage, a flying stage that we already have, thank you sakurai, and an adventure stage just like in adventure mode, with no need of action replay.

Don't ask Mexicans to build your hotel. That's racist. And does anyone know if there will be another Pokemon game for Wii?