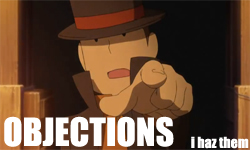 Professor Layton vs. Ace Attorney is a joint project between Level 5 and Capcom that's landing on the 3DS in Japan towards the end of this year. A new trailer has surfaced at the Tokyo Game Show revealing some of its animation and gameplay. We can see here there's a mix of puzzle solving Layton-style and courtroom drama as well.

The game hasn't even been confirmed for a western release, but we remain hopeful it will come sooner or later?

Life would be so much easier if I understood Japanese.