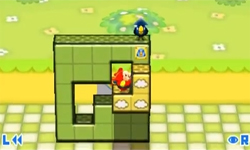 Ok, this is a little confusing, but... The eShop game Pushmo (known as Pullblox in Europe) is getting a sequel. The sequel is to be called Crashmo (or Fallblox in Europe). I hope I've got that right. Its US release date is November 22nd, 2012.

The new game is said to have a whole new way of playing - with gravity mechanics, floating blocks, doors and switches. Gamers have to "push, pull and slide" blocks around to make it to the top. Here are a few screenshots:

Awesomeness! (^-^) Nintendo are spoiling us lately.