Fishing enthusiasts can look forward to another Rapala game being released next month, in Rapala Fishing Frenzy.

The first game Rapala Tournament Fishing was released around the same time as the Wii's launch. Sadly it was an abysmal failure, if only in gameplay terms and not in sales. It averaged around 4/10 in review scores and left customers reeling (ahaha).

Fishing Frenzy will come packed in with this updated rod accessory: 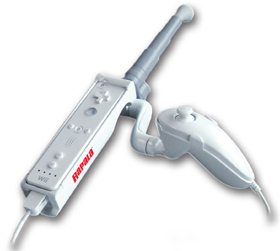 The release date is September 2nd.

It'll never match the might of Dreamcast's fishing rod.

Wonder if that there gadget would make my sunday early morning zelda fishing trips easier?

Exactly the dc fishing controller was nice but this is horrible! Why not just make a wireless one instead of this monstrosity? I'll pass.

No thanks, I already have a closet full of wiimote addons.

That makes the game look cooler.