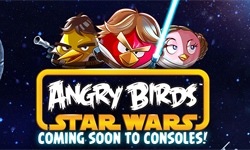 Like it or not, gaming on mobile devices has gained some traction in recent years. While the experience on offer may be of a different quality, titles like Angry Birds have proved massively popular to casual players.

In the press today a developer at Rovio (the studio behind Angry Birds) made a slanting comment aimed at Nintendo:

It's interesting to see people like Nintendo saying smartphones are destroying the games industry. Of course, if I was trying to sell $49 pieces of plastic to people then yes, I'd be worried too.

Despite these less than stellar words, Rovio's newest game Angry Birds Star Wars will be hitting Wii U and Wii consoles, as well as the 3DS handheld - and not as a downloadable title either:

These guys should make a real game before they go talking about Nintendo like that.

I can't help wondering who buys games like these....