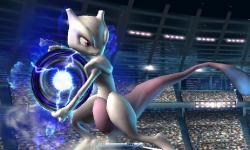 Characters include Ridley, Mewtwo, and others

Early this morning, a new rumor for the upcoming Super Smash Bros. has spread like wildfire on the Internet. NeoGAF user Spainkiller, has claimed to have an inside source that worked on the European localization of the game.

According to this source, moving models of Dixie Kong, Ridley, Chorus Men, and Mewtwo exist within the game and claims that they can be unlocked by linking the 3DS and Wii U versions.

From a business point of view, a move like this makes perfect sense. It's a great way to get Wii U owners excited for the game, but also to entice players who bought the 3DS version to spend 60 dollars to re-buy the game on the Wii U.

I do want to stress that this is only a rumor, and as such should only be taken with a grain of salt. However, it is very possible, that despite all the leaks, Nintendo still might have a few secrets left to reveal for this game.

Good incentive to shell out for a Smash Bros. U Bundle. Wii U sales COULD soar this Winter.

I'm sure this feature is going to be huge success, and that Nintendo will start implanting it in their other games.