It turns out Samus can use her whip in Super Smash Bros Brawl as a recovery tool. Much like Batman and his... cable thing. Batarak! Batarat? Something like that.

Once she goes over the edge, with a flick of the whip she starts swinging. Then by retracting it she can bring herself back up, and return into the fray. 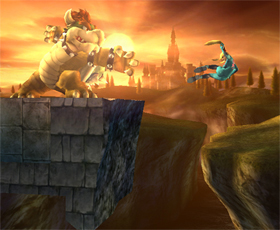 No! We're not going shopping again. 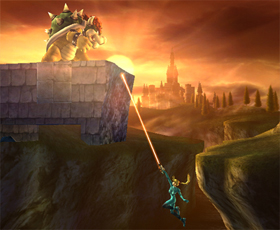 But we need more cushions. 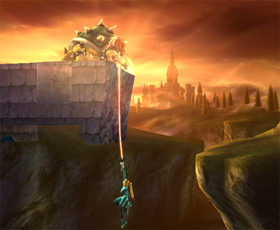 You buy too many cushions. 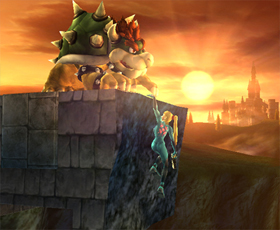 This kind of move isn't restricted to Samus either, other characters will have similar maneuvers.

Poor update, many people knew this, but I guess it's good for n00bs in Smash. loled at the captions.

Silly titles! Tricks are for kids.

You could do this on melee with samus and link.

I recall Link having the ability to do this with his Hookshot in Melee.

I bet link uses his Hookshot.

Is it just me or does bowser look different and bigger in those pics?

Kind of cheating. Every time you fall you can probably do that.

The lighting is superb. It should look better in motion. 60fps?! Please.

I bet Link uses his clawshot since that's what he uses in TP, not a hookshot.

Yeah, this isn't new at all. I hope this isn't the ONLY way she can recover, that would be the worst. It would give people a lot of chances to knock you back off the edge.

I was hoping for another character. In fact, modes like the Subspace Emissary should have boss characters like Petey Piranha.

Yoshi could his tongue for this, Samus (in her suit) could use the grapple laser from last time, Link could use his newly equipped clawshot, and Pit could shoot a grappling arrow maybe?

Well DUH! Just as it was for Melee.

Ooh and link can double claw shot from ledge to ledge! Maybe.

The only thing interesting about this update is the fact ALL characters SHOULD be able to do this.

I guess Goomba is a friend to Indiana Jones.

This will be very, very helpful.

Maybe ZSS needs to have the whip to recover. She might not be able to jump as high, giving her this move as an option.

Hey it's not hookshot any more, it's clawshot for Link's grabbing weapon.

Lots of characters have changed from melee to brawl. For example, mario has more patches on his overalls.

It looks like, unlike in previous games, it doesn't matter where you are in the air when you use them.

Thought how Yoshi can do it: with his tongue (of course).

Yoshi totally will be able to do this with his tongue.